One of the luckiest things that happened to me when I came out in 1992 was that a friend referred me to a therapist who sang in Musaic, a local gay and lesbian choir. Music was an integral part of R’s life—and her counselling practice. When I asked her how on earth I was supposed to navigate from my safe, familiar life as a married, suburban stay-at-home mom to the terrifying, unknown lesbian community I’d heard whispers of but had no clue where to find, she offered a simple solution: music.

I wanted to know, for example, how I could tell if a woman was a lesbian or not. (Apparently my gaydar hadn’t kicked in yet.) I certainly didn’t want to humiliate myself by accidentally asking a straight woman out. (Not that I had enough moxie, at that point, to ask anyone out!) R said, “Ask her if she likes the music of Ferron or Cris Williamson.”

Leslie-the-small-town-raised-suburban-housewife had never heard of either of those women’s music icons. And while it’s true that over the years I did spot the occasional straight woman at a Ferron concert, she was usually towing along a boyfriend or a husband who had no idea, poor guy, that his beloved was on the verge of leaving him for a woman. (Or so the lesbians in the lineup would predict, smiling knowingly, many of us having been half of that couple.) 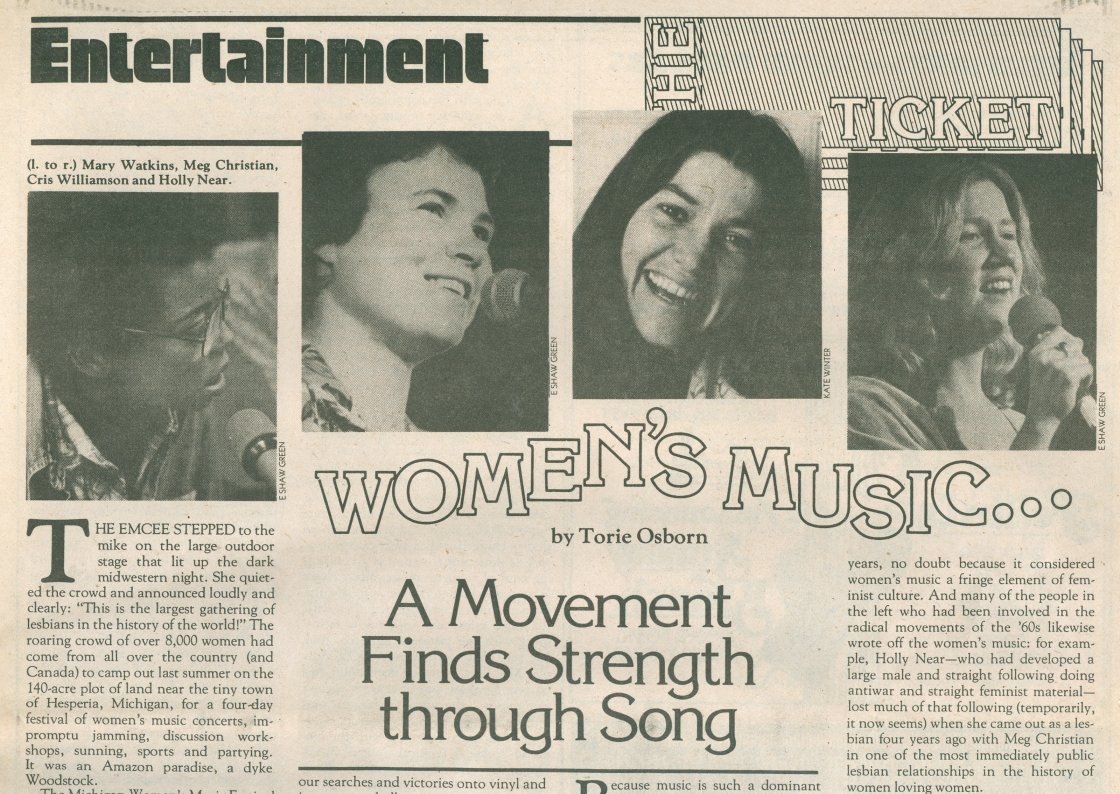 Women’s music became a conduit between me and the crowds of women who reflected my burgeoning woman-identified self back to me in concert lineups. (Oh Godde, those concerts were heady experiences!) 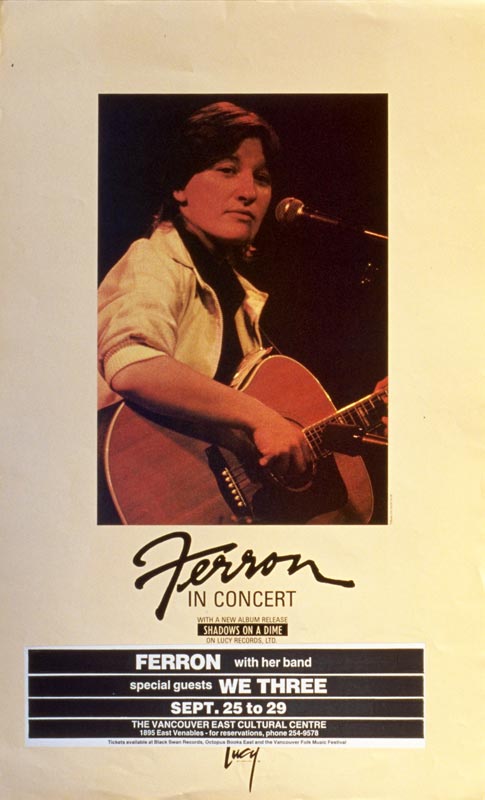 But it was so much more than that. Women’s music birthed me. It brought me into being—as myself. As her band member DB Benedictson says in the documentary Ferron: Girl on a Road (watch the trailer on YouTube) Ferron’s music is “almost like a memory for me, it’s like a deep soul memory, from a cellular level.” Yes.

Girl on a Road and Cris Williamson’s Waterfall and Native Dancer were my biography, set to music. Ferron was describing my life when she sang about “the morning that was the closing of my youth, when I said goodbye to no one, and in that way faced my truth.” By 14, I had survived my own Tigerboy, and done my best since then “to follow the calling of my soul.” That soul-call led me to come out at 34, and when I did, I discovered the profound truth of Cris Williamson’s lyrics: “When you open up your life to the living, all things come spilling in on you, and you’re flowing like a river, the Changer and the Changed.”

All things included this:

Just a situation, with four walls and a floor
She stared at the ceiling, she longed for the door.
Strange lands and separation, so far from home
And so far, she’s holding her own.

Native dancer is running against the dark star
And so far, she’s holding her own.
Just a stone’s throw away from home
She swore she’d do it all alone.

She’s got nerves of steel.

Just a situation, with four walls and a floor
She stared at the ceiling, she longed for the door.
Strange lands and separation, so far from home
And so far, she’s holding her own.

It wasn’t only women’s music that R gifted me. She gave me the gay a capella group The Flirtations and the group’s brilliant co-founder, AIDS-activist Michael Callen. The Flirts awakened my political consciousness with songs like Biko and Something Inside So Strong. They also sang and recorded Fred Small’s sweet, beautiful “Everything Possible”—a song that carried me through a difficult, lonely, exhilarating, terrifying time. This morning, as I was writing this post, I looked through some old pieces of my writing. I knew I had written about The Flirts and “Everything Possible” many years ago. I didn’t find the piece I was looking for, but I found this one, which I don’t remember writing. I’m glad I found it, though.

One day I sat in my therapist’s office discussing how to explain to my sons why I was leaving their dad. “Have you thought about telling them the truth?” she asked.

“Well, I thought I would say that I don’t have the right kind of love for Daddy anymore. How does that sound?” She thought it sounded fine, as far as it went. “But,” she added, “I think you should consider telling them the truth.”

“The truth? What truth? That I’ve realized I’m a lesbian? They’re only 6 and 3! They don’t even know about sex yet. What would I say?”

At the end of our session, she played a tape of a Flirtations song she thought would help me explain things to my boys. It was a lullaby, a gentle assurance to children that they can “be anybody they want to be, and love whomever they will.” I was in tears by the end of the first verse, wondering what it would have been like to have heard that song when I was a little girl. There had never been any question but that I would date boys and marry a man. I certainly never questioned it. I tried so hard to make that life fit. It didn’t. I decided to tell my young sons the truth.

The telling was gradual. Over a period of weeks I explained to them that some women love women, that these women are called lesbians, and that although some people think this is unusual or wrong, I didn’t. Finally, I told them I was a lesbian.

My 3-year-old took it in stride. His older brother asked questions: “How do you know? Have you always been like this? Who do you love, Mom?”

I wasn’t in a relationship—or even dating yet—so the last question was a bit tricky, but my answer seemed to satisfy him because he listened—as intently as 6-year-olds listen—and then declared, “Okay, Mom, I get your point!”

Here’s my point: I want every child to hear this song. With love, and as many times as possible.

I put a lot of links in this post and I hope you’ll click on them. There’s a lot of great history—and herstory—here.

4 Responses to “Everything possible”