3. Tour the Cliffs in the morning.

4. Explore Doolin in the afternoon.

All goes according to plan … for the first 30 minutes …. until the bus pulls into Lisdoonvarna. 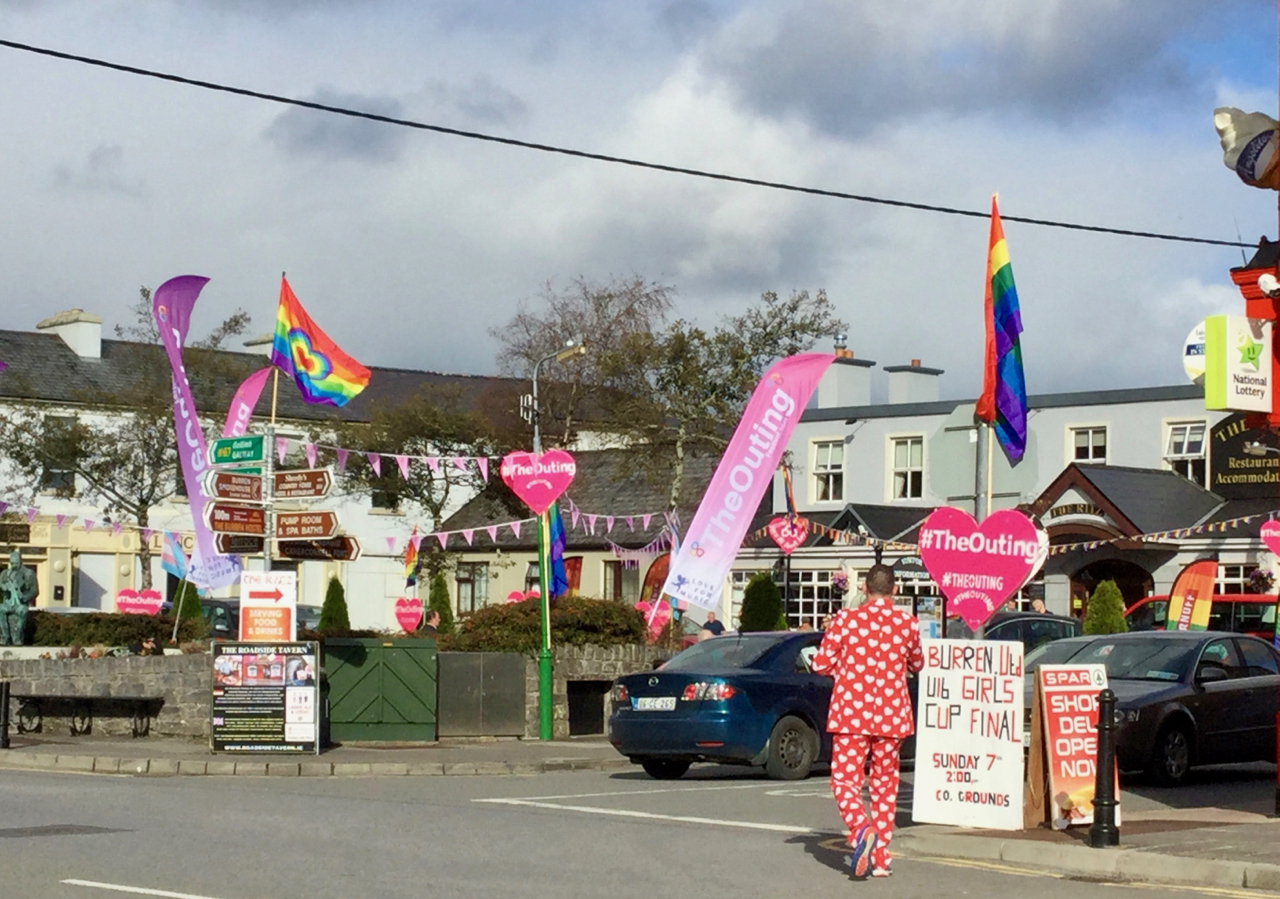 What’s all this then? Rainbow flags? Pink bunting? Men in hearts? This looks … gay!

“An LGBT weekend like no other!” The Outing is a fusion of music, comedy, ceilí bands, and the best of Ireland’s and international performers, drag artists and DJs. The world’s only LGBT music & matchmaking festival.

Alrighty then! New plan! We’ll still go and see the Cliffs of Moher. You kinda have to when you’re in Ireland, don’t you? But then we’re coming back here!

Front and center in the photo above is The Outing’s director and gay matchmaker Eddie McGuinness. That’s events coordinator Daithí Naughton under the rainbow umbrella on the left. Both men are also active in Dublin Pride. It was Eddie’s idea to claim queer space by spinning off from the annual (hetero-focused) Lisdoonvarna Matchmaking Festival, world famous for making love matches in Ireland since the 1860s.

Once a year for the past six years The Outing has welcomed straight, gay, lesbian, bi and trans people and their friends to Lisdoonvarna (pop. 750) to enjoy a weekend of nonstop fun where they are “not the only gay in the village.”

“Ireland’s foremost drag queen” Panti Bliss, who hosted The Outing when it launched in 2013, explains the event’s basic premise:

The Outing takes something quintessentially Irish and dips it in glitter. It opens up the idea of “traditional Irishness” to the LGBT community and says, actually, yes, you can be LGBT and still be as Irish as the Lisdoonvarna Festival.

In a country that’s had marriage equality since 2015, matchmaker Eddie is a Marry Me Ireland celebrant. He’s performed at least one wedding for a couple he and Panti matched up at the festival. But The Outing isn’t only for singles. Couples and groups of friends are welcome, too. We were celebrating our 25th anniversary, and what a great venue for it!

(Please note: Next year The Outing will be held in a new location – see details at the end of this post.)

LW and I toured the Cliffs (maybe a tad quickly) and got back to “Lezdoonvarna” at 3. At the Burren Storehouse, Daithí fitted us with festival wristbands and recommended the Roadside Tavern next door for lunch. After a pint of Burren Black and one of the best meals of our entire trip, we walked up to the town square to watch the Gay Games. 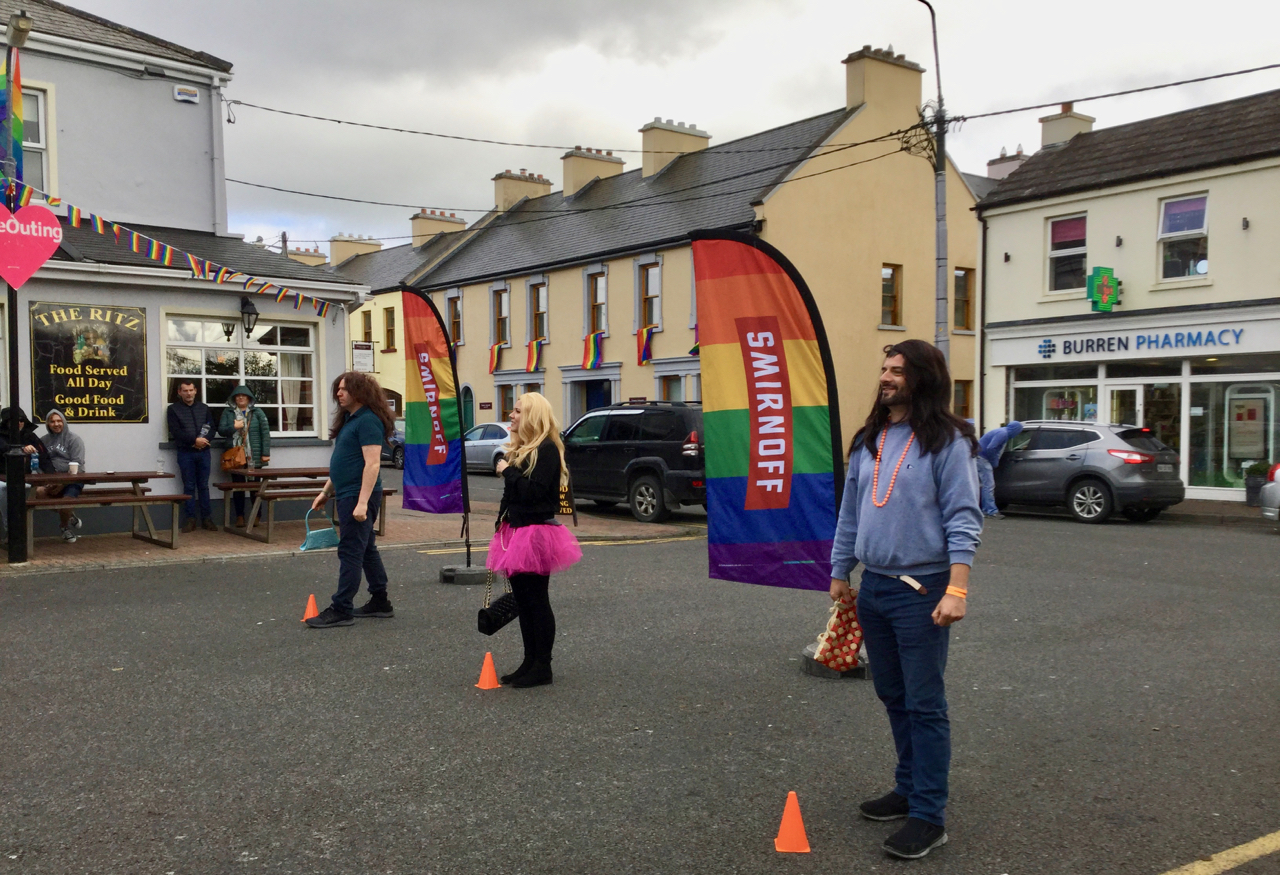 That is, LW watched. I got recruited.

My teammate and I won gold for the Egg Toss! You’ll have to take my word for it, though. LW was in the moment and didn’t take a picture.

We were brilliant, I promise you. And we were just that talented we both avoided wearing raw egg!

Triumphant, we returned to the Storehouse, where Knot Normal Crafts had wares on display. Board games and karaoke were on the afternoon agenda.

I love karaoke, and I wasn’t disappointed. Both hosts were gorgeous (Noah Halpin far left and Kiki St Clair far right) and so were the performers! 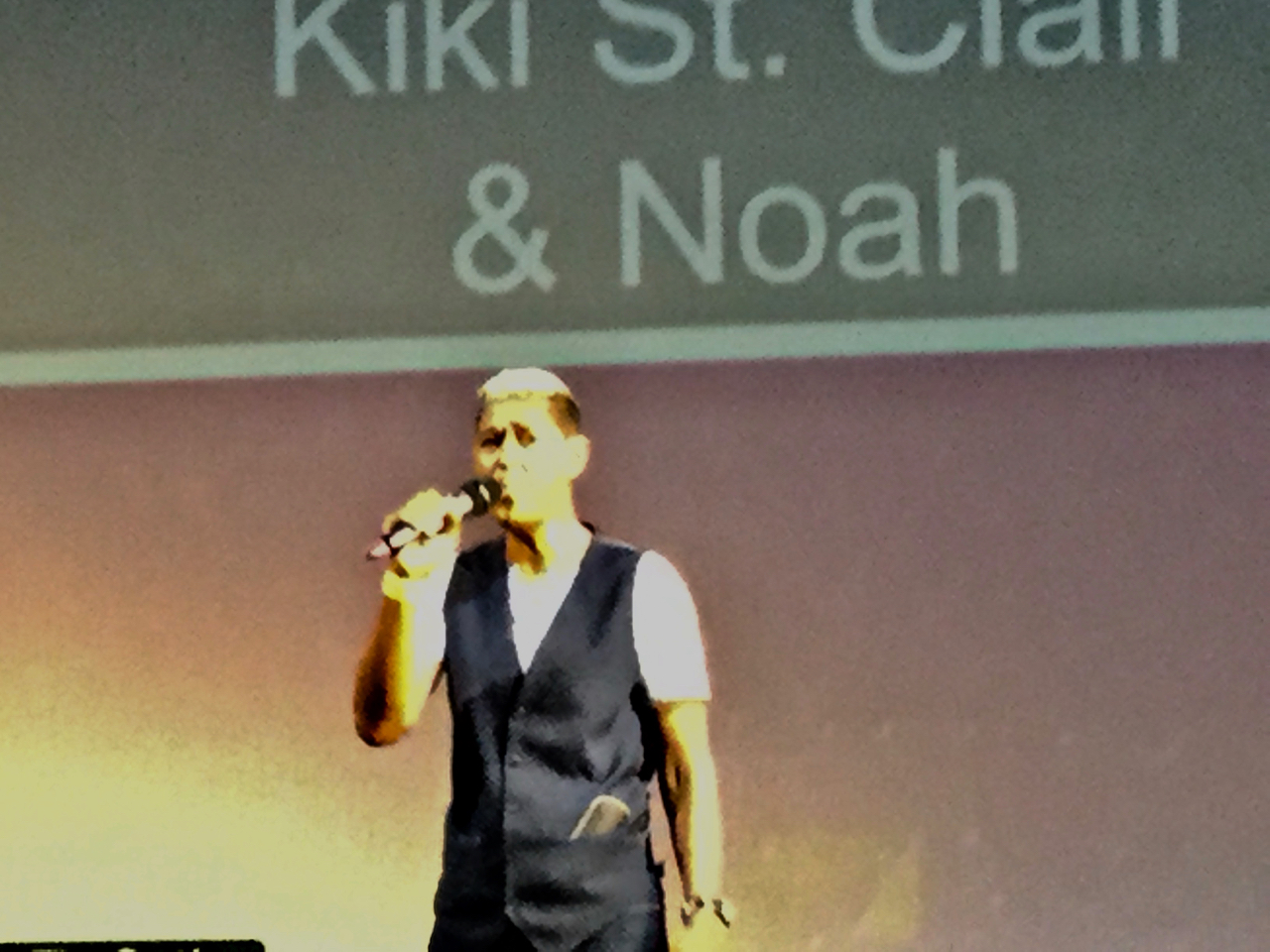 One of my favourites was Jackie, who did a stirring rendition of Bob Marley’s Redemption Song.

And when Ali (standing next to Noah in the photo above) belted out Zombie I had one of those “pinch me” moments – am I really in Ireland rocking out to The Cranberries – with the Irish branch of my tribe?

I had a blast playing Jenga with our table mates, Marcus and Charlotte. 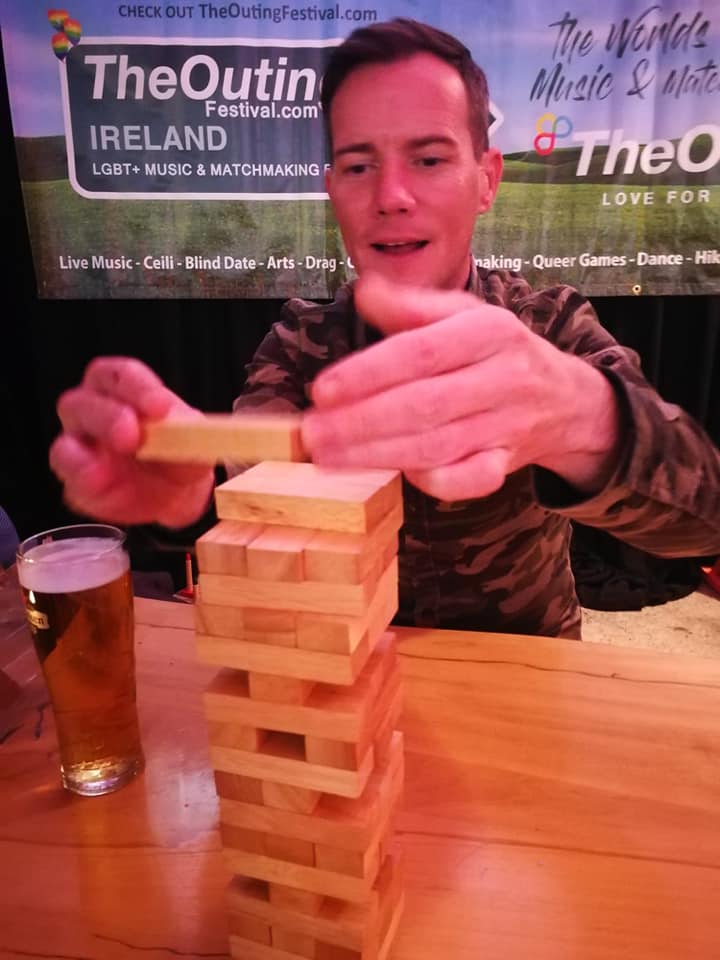 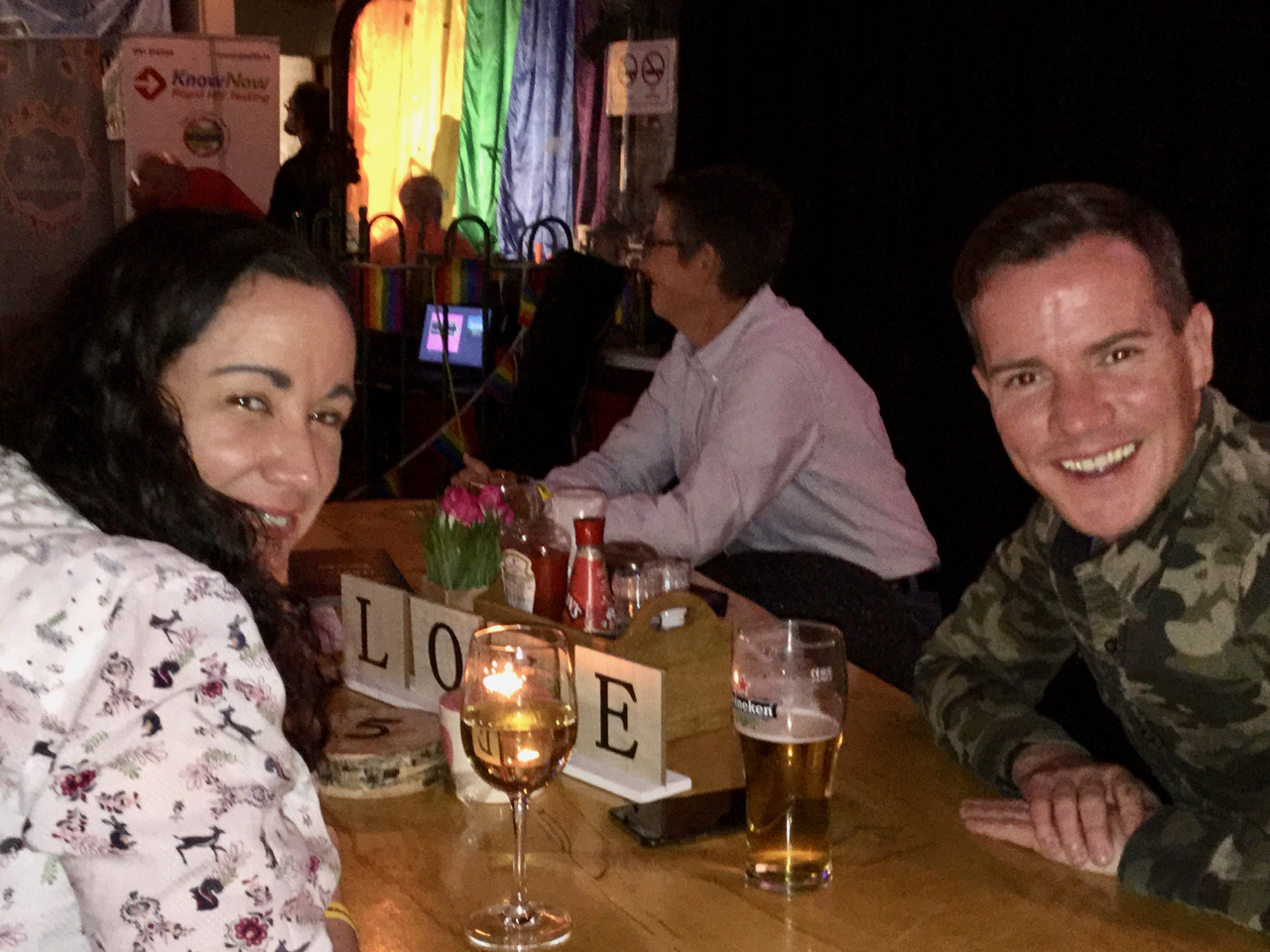 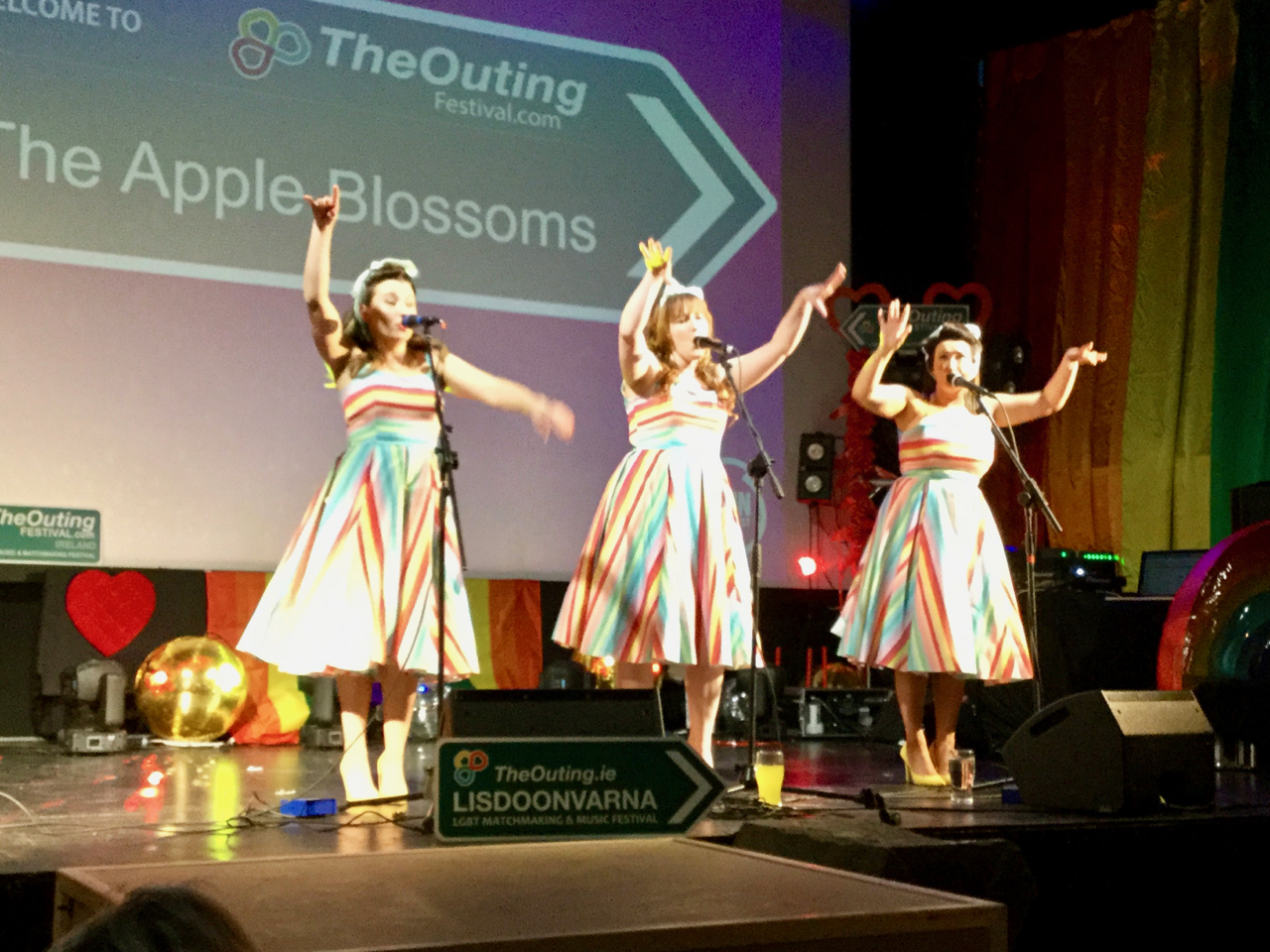 And the fabulous Apple Blossoms got this pair of well-ripened fruits up dancing.

The fun was only just getting started when we had to go. Some of what we missed included Cork band Sparkle, Dublin’s DJ Ruth, and the “variety show to end all shows” hosted by drag queen Paul Ryder, who caused a sensation this spring on Ireland’s Got Talent.

At 8:05 we dash out to catch the last bus back to our B&B. It arrives at Lisdoonvarna town centre on time, and so do we.

The driver shakes his head apologetically.

“This is the end of the line tonight, I’m sorry.”

Across the street at The Ritz we call for a taxi and then wait over an hour for the only operating cab in Lisdoonvarna.

“Busy night,” we remark when Peter Mooney pulls up to the curb.

He nods. “There’s a gay party in town this weekend.”

The Outing Music and Matchmaking Festival 2019 will be held Friday & Saturday September 27 & 28 at The Inn at Dromoland on the grounds of Dromoland Castle Estate, a 10-minute drive from Shannon Airport. For ticket information look here.

Be there and be quare—The Outing is a gay party not to be missed!

4 Responses to “Not the only gays in the Irish village!”